What to Do When You’ve Been Called Out

This trifold pamphlet provides an excellent basic idea of what to do when you’ve been called out for sexual assault, abuse, and other forms of sexual violence. It provides ideas on taking responsibility for your actions, learning how to support others, finding support for yourself, promoting personal and community healing, communicating about these issues, and identifying and addressing harmful behaviors. It’s a useful guide for helping folks who have done violence work towards building resilient, coherent communities in the wake of their violence; it also helps people who’ve done harm understand not only how they can avoid making the harm worse, but also how they can contribute to healing. Highly recommended!
.

A trifold pamphlet that lists steps that people who’ve been called out for sexual assault should take.

A zine about community response to sexual assault. Issue #2

We Are All Survivors, We Are All Perpetrators 679KB

This short zine combines to excellent resources on sexual assault: the article “We Are All Survivors, We Are All Perpetrators” from the Crimethinc publication Rolling Thunder and a piece titled “What To Do When Someone Tells You That You Violated Their Boundaries, Made Them Feel Uncomfortable, Or Committed Assault (A Start).” Both offer important ideas for beginning discussions about sexual assault from a perspective that brings the issue into the open rather than keeping it hidden in the shadows. 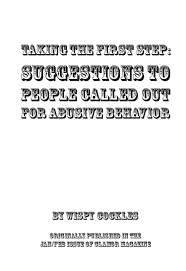 Looks like a collection of article from other sources.

by the Kansas Mutual Aid Collective

This is the first issue of a zine sub-titled “a booklet for men against sexism.” It features a number of essays looking at patriarchy and sexism and the role men have in upholding these institutions. The writings are grouped into four topic areas: 1) growing up male: writings on socialization and manhood; 2) changing ways: re-defining manhood; 3) men’s work: the work we can do to end sexism in our lives and communities; 4) getting to know yourself: some questions to aid in the process of self-discovery.

Sub-titled “a booklet for men against sexism,” this is the second issue of an older zine focused on critical theory and personal reflections on male socialization, sexism, and the concept of manhood. It has writings from several different authors on this broad subject who share their thoughts on manhood, male violence against women, father-son relationships, everyday anti-sexism, and demands from women.

Dealing With Our Shit: Six Years of Men’s Group and Accountability Work

This zine is by Dealing With Our Shit, a men’s group for men and male-identified people from the Twin Cities who later took on the task of mentoring other males through accountability processes for sexual assault. It’s over 100 pages of interviews, reflections, and analysis about their history, their experiences, and their effectiveness. A great resource for anyone interested in working on community response to sexual assault outside the prison/court system. Lots of art, too!

In this zine, the Philly Dudes Collective—an anti-sexist “men’s group” that came out of the radical/anarchist and punk scenes in Philadelphia—gives an overview of their work during the first year of their existence. It includes a sampling of posters they used to promote their events, workshops and discussions they led, panels they participated on, etc. They offer good outlines for hosting conversations on masculinity and patriarchy and men’s roles in it. This is an excellent resource for anyone hoping to have conversations about masculinity, patriarchy, and gender in radical political and social scenes.

Don’t be a Dick

The cover says “(for men)”, and it’s put out by a Denver Collective who “identify as experiencing male privilege.” You should download it and read it if your interested.

As If They Were Human: A Different Take on Perpetrator Accountability

This zine contains three articles by Tod Augusta-Scott, a social worker who works with men who have battered, abused, or used sexual violence. He has a novel approach to leading the men to take responsibility for their own actions and be accountable. This approach is based in challenging gender essentialism, listening to the men, and helping them develop new stories for their lives. Cogent and insightful, Tod Augusta-Scott’s articles provide a practical model that should be useful to people involved in community-based accountability work.

“This booklet has been put together by a small group of men. It’s an honest and open view of how a few men see sex, other men and themselves. It’s also about how different our lives in society have been, and how as men we are all linked to it’s controlling powers. We hope to follow this booklet with another sometime in the future called ‘Love and Men’. This will be more about our own feelings towards each other and how we refuse and abuse them. Any men who wish to become involved or just want to write then please do.”

Men Speaking Out on Men and Sexism

Interview with Philly’s Pissed and Philly Stands Up

An interview with Philly’s Pissed and Philly Stands Up, two collectives that work to support survivors of sexual assault and hold perpetrators accountable. From Heartattack zine.

404 Error! Either the internet hasn’t caught up, or there are no known material resources in circulation. I’ll include some helplines instead.

call STOP IT NOW.org.uk on 0808 100 0900
Help line aimed at adults who have abused or are thinking of abusing a child, family and friends of abusers and parents of children and young people with worrying sexual behavior.

Respect: 0808 802 4040
Respect runs a confidential helpline for domestic violence perpetrators (male or female). They offer information and advice to support perpetrators stop their violence and change their abusive behaviours.
Helpline is open Mon – Fri, 10am – 1pm and 2pm – 5pm.
www.respectphoneline.org.uk

If you’re looking for any material in the mean time, you can catch up on any learnt bad habits through being socialised in the gender binary.

What Happened to Sisterhood?

Cat fights, gossip, body policing, slut shaming, enough is enough! Be a better sista, the world is cruel enough without us being cruel to each other. You can’t smash patriarchy by yourself!